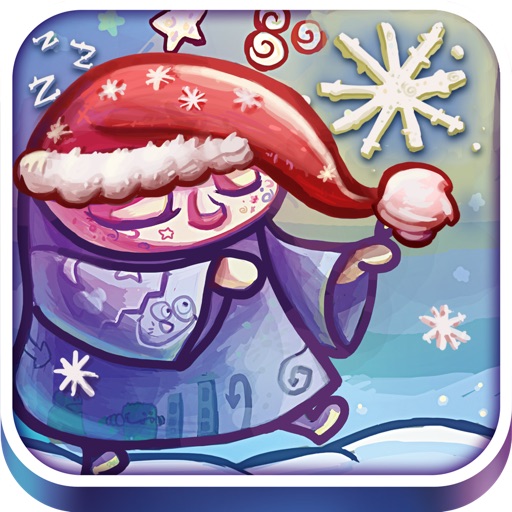 Our Review by Jennifer Allen on November 16th, 2012
Rating:

With a dash of Endless Running and more than a hefty dose of environmental based puzzles, Sleepwalker's Journey is a delightful game, indeed. Directing sleepwalking Moonboy as he attempts to find his way out of his dreams and into his bed is both charming and compelling. 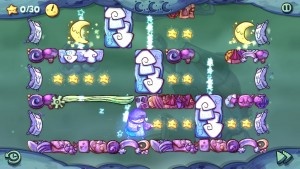 Like any good sleepwalker, Moonboy can't stop walking. Instead, the player must keep him safe by manipulating areas around him. Each level offers up a wide array of obstacles, each manipulated with the swipe or touch of a finger. Early stages might simply involve swiping a ramp up or down but later levels require the manipulation of cannons and tightropes in order to succeed. Fortunately, manipulating such things proves quick and simple to do. Platforms are particularly prominent and it's easy to swipe them up or down in order to propel Moonboy around. Obstacles do start to grow steadily in number, however.

There's the added impetus of collecting up stars and crescent moons, also, adding to the player's chances of gaining full marks for completing a level. Pillows prove particularly useful here, given their ability to bounce Moonboy in the opposite direction that he was walking in. After a time, completing a stage is easy enough but there's quite a challenge to 100% the level.

Understandably, there's a lot of thinking ahead to do. While Moonboy might move relatively slowly through his dreams, points are awarded for fast progression and keeping one's finger down on the speed up button. Quickly, Sleepwalker's Journey goes from a relaxing meander to an almost stressful case of gaming.

Sleepwalker's Journey isn't actually the longest of titles, making simply finishing each stage relatively easy despite the stress inducing moments that are scattered around. It might slightly raise one's blood pressure at times, given the amount that needs to be juggled, but it's worth it. Completing each level by finding all the stars and moons will be quite a challenge, but an enjoyable one. Throughout, Sleepwalker's Journey's charm shines through, ever brightly.

Posted in: Reviews, Games, iPhone Apps and Games
Tagged With: Puzzle, Physics, $0.99, Sleepwalking, 11 Bit Studios, Environmental, Sleepwalker's Journey, Moonboy, Endless Walking
Share This:
Tweet
Review disclosure: note that the product reviewed on this page may have been provided to us by the developer for the purposes of this review. Note that if the developer provides the product or not, this does not impact the review or score.
Advertisement

Bike Baron 2 opens pre-orders for iOS with more motorbike tracks, puzzles, and stunts than ever
MU Archangel: Everything we know about MU Online’s mobile spin-off
Wild Rift will have a global esports tournament in late 2021, Riot has announced
Distract Yourself With These Great Mobile Games on Sale Right Now
Apple Arcade: Ranked - Top 25 [Updated 5.6]
A Scrub's Guide to League of Legends: Wild Rift - Breaking Down the Meta - Team Comps
A Scrub's Guide to League of Legends: Wild Rift
Golf Impact is a new mobile sports game out now for iOS and Android
The best run-based games on iOS
Immersive horror game Under: Depths of Fear is out now on iOS
A Scrub's Guide to League of Legends: Wild Rift - What is this game?
AFK Arena's latest collaboration with Ubisoft introduces the Prince of Persia to the popular idle RPG
MU Archangel: Beginner’s guide to character classes
Pokemon Go Fest 2021 will take place on July 17th and 18th
Fallen of the Round review [

]
Gears Pop!, the Gears of War and Funko Pop mashup from Mediatonic, has shut down
Diablo: Immortal Closed Alpha First Impressions
Touhou LostWord is heading for a global launch for iOS and Android following success in Japan