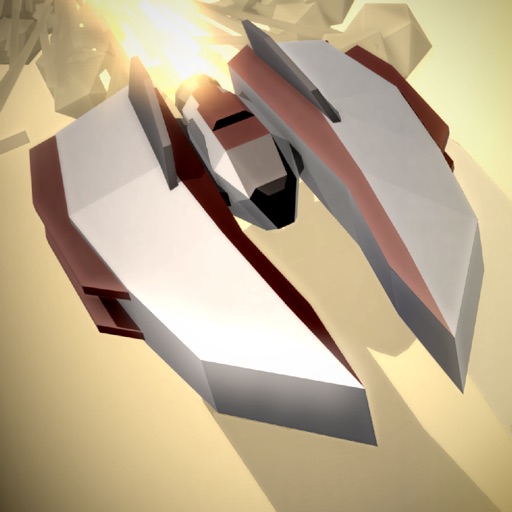 :: NOT SO HOT
Share This:
Tweet
Scorcher is a runner with somewhat interesting mechanics, but only its visuals make it a standout game.
Developer: Radiangames

Runners have origins that trace back to the 80s, but their popularity exploded in 2009 with the release of Canabalt for iOS. Since then, runners of all shapes and sizes have been dashing out on pretty much every game platform, but the big hits in this genre have mostly lived on mobile. Scorcher from Radiangames is the latest contender in this arena, and—although it looks really slick—doesn’t quite have the oomph to make it feel particularly special.

Scorcher imagines a world where blazing fast hovercraft race through desert sands on the hunt for sand sharks. Or, at least that’s what it seems like. Scorcher doesn’t really provide explicit exposition. It’s sole focus is on the action, which (mostly) involves piloting your craft by swiping your finger across the screen and releasing (or tapping) to jump over mines and dodge giant sand worms.

Everything presented in Scorcher is smooth and shiny. The sands shimmer and your ship glides swiftly over it at a fluid frame rate. Even the gigantic, spiny sand worms that breach the surface on their own hunt for sharks do so in a way that feels elegant and frictionless.

Your goal in any round of Scorcher is to make it as far as possible without crashing your ship. Canyon walls, sand worms, and mines are most of what you can expect to stop you, but you can avoid them through deft steering or by launching your ship in the air to clear obstacles. An added aspect to the game is the presence of sand sharks, which you want to actually run into with your ship, as they can help enhance your score and earn you unlocks.

The further you get into a run, the faster things get, ensuring that you’ll never reach a point where you’re able to play endlessly with ease. If you do end up crashing, things aren’t quite over. Your ship can take two hits before exploding, and gathering 10 sand sharks when damaged can restore your ship to mint condition.

There’s also a certain point in Scorcher where you unlock an additional mode that plays pretty differently. Instead of piloting a ship, you’re put in control of one of the game’s giant sand worms. In this mode, there’s no such thing as crashing. Instead, it’s time-based, where you’re aiming to maximize the number of sharks and mines you can hit without having to worry so much about twitch reflexes or survival.

Bumps in the road

Scorcher’s long-term replayability hinges mostly on your desire to set a new distance record, but it also provides some unlocks to give you something to work toward along the way. Aside from the aforementioned sand worm mode, these unlocks seem purely cosmetic, allowing you to choose between three different-looking ships, four different-colored stages, or four different-looking worms.

I say that these unlocks “seem” cosmetic because Scorcher doesn’t really communicate whether they are or not. This lack of communication is one of a few gripes I have with the game. I spent my first dozen or so runs in Scorcher assuming I needed to avoid sand sharks. Similarly, I spent a lot of time with the game keeping a wide berth around mines, since they have an aura that pulses around them, and I had assumed that meant that they were proximity mines. They are not.

On another, not-so-positive note, Scorcheroccasionally has some performance problems. On my brand new iPhone XR, the game’s frame rate periodically hitches, which is hugely disruptive for a game that depends on smoothness for the game to click both aesthetically and mechanically.

Even if Scorcher were a little more communicative and stable though, I’m not sure it would be a standout runner. It’s definitely got a unique look, but its gameplay doesn’t feel like it pushes the genre anywhere exciting.

There’s some novel systems at play in Scorcher, but they don’t ever click enough to make them any more than a backdrop for what is a really slick-looking—but otherwise conventional—runner. Perhaps if Scorcher were a bit more communicative about said systems or technically proficient enough to offer up buttery smooth gameplay all the time, it would feel more special. As of now though, it’s a bit disappointing.

Posted in: Reviews, Games, iPhone Apps and Games, iPad Apps and Games, iPad Games
Tagged With: Review, Runner, Radiangames, scorcher
Share This:
Tweet
Review disclosure: note that the product reviewed on this page may have been provided to us by the developer for the purposes of this review. Note that if the developer provides the product or not, this does not impact the review or score.
Advertisement