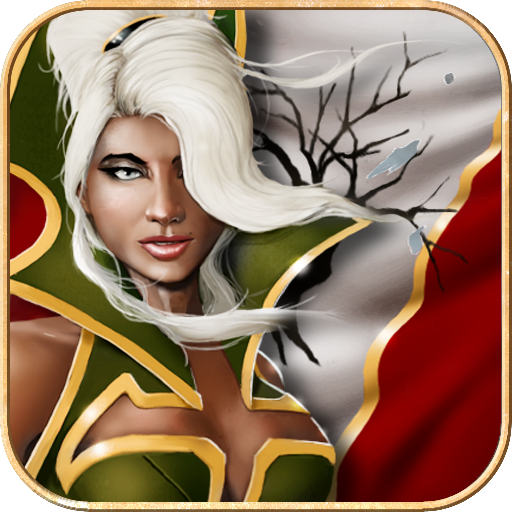 Our Review by Jason Wadsworth on August 22nd, 2011
Rating:

:: PERPLEXING
Share This:
Tweet
This tower defense game pits the player against a constant flow of relentless enemies and it doesn't pull any punches.
Developer: VisionaryX GmbH

A Knights Dawn is a simple, fantasy themed tower defense game. The game unfolds much as one would expect, having the player progress from level to level by strategically placing defenses in order to protect a certain position from a constant flow of enemies.

In A Knights Dawn the levels are in a 2D perspective and they generally consist of several different levels connected by ramps and stairs. The flow of enemies starts at one end of this path and the enemies make their way up or down the ramps and stairs to each level and finally to the end of the path, which the player is trying to protect. Along this path, there are flags positioned periodically. At these positions, the player can use gold to station one of six different types of defenders including warriors with rapiers, daggers, or rifles. Each different type of unit does a different amount of damage and has a different range of attack and cool-down period. More gold is awarded as enemies are defeated and this gold can be used to buy more units or to upgrade the strength and damage dealt out by existing units.

A Knights Dawn has all the elements of an enjoyable tower defense game; however, it has some serious difficulty balance issues. Even the first few levels of the game on the easiest settings can be extremely difficult. Early enemies in the game seem out of balance when compared to the power of early units with no upgrades. Upon the completion of each level, honor points are awarded which can then be used to boost the global stats of all defense units in the game. Still, the amount of time a player would have to spend to buff their units to a balanced level would probably be more time than the game really merits.

This game looks great, but it suffers from some fundamentally broken gameplay as well as a very enigmatic navigation scheme. Tower defense fans looking for an unforgiving challenge may find this is just what they are looking for, but others will probably want to try another title.

Posted in: Reviews, Games, iPhone Apps and Games, iPad Apps and Games, iPad Games
Tagged With: Tower, Gun, Sword, Defense, Enemies, $0.99, Upgrade, Attack, Walk, Rifle, VisionaryX GmbH
Share This:
Tweet
Review disclosure: note that the product reviewed on this page may have been provided to us by the developer for the purposes of this review. Note that if the developer provides the product or not, this does not impact the review or score.
Advertisement

]
Lineage2M, NCSOFT’s stunning follow-up to the popular franchise, is now ready for pre-download
5 futuristic games like PUBG New State
5 reasons why The Lord of the Rings remains the most exciting fantasy franchise
Moncage review [