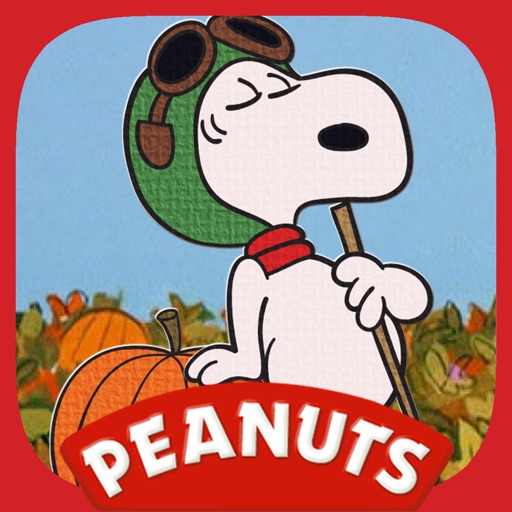 It’s The Great Pumpkin, Charlie Brown, as the title suggests, is an adaptation of the classic holiday cartoon of the same name, now adapted into a universal app.

I think it is fair to assume that most families know the story of It’s The Great Pumpkin, Charlie Brown, as well as the classic Peanuts characters found within.

To those who have forgotten, one of the main plot points is when Linus, who believes strongly in The Great Pumpkin, stays out all night on Halloween to see him, but this never happens.

The look of this app is quite nice, with the style of the original illustrations used on what looks like textured paper - a nice detail in this app which has been designed to look like a traditional pop-up book with interactions that bring the pop-up aspect of this app to life, including also an interactive piano section. It is worth noting, however, that this app is less interactive in general that the Charlie Brown Christmas app released last year also by Loud Crow Interactive.

This being the case it is still a treat to hear the narration by Peter Robbins, the actor who voiced Charlie Brown as well as other original dialogue used from the 1966 holiday special - to a very nice effect.

I also like how one turns the text section of these pages independently of the image on the screen, as this allows a series of single sentences to be read before one turns the page, instead of a long page of text. This simplifies the reading - great for those just learning. Also helpful are the highlighted words while listening to narration as well as the ability to tap on a single word to hear it spoken, even when reading this app to oneself.

I was eager to review this app, giving my son a chance to experience this story in some aspects the same way I did when I was a child, but with the added benefit of the highlighted, narrated text.

I remember fondly the mythology of The Great Pumpkin - something I thought my son may especially enjoy after our recent trip to a pumpkin farm.

I did, however, listen to this app myself before showing it to my boy - not to preview it for content, but to keep on track for review purposes.

During my time with this app, I began to wonder: When did It’s The Great Pumpkin, Charlie Brown, become sad and mean?

I was well aware of the depressing nature of the Peanuts Christmas story, but I must not have remembered the specifics of It’s The Great Pumpkin, Charlie Brown very well from my childhood because it definitely lacks a lot in terms of sensitivity - which I had forgotten about.

Although I was never a fan of Lucy tripping Charlie Brown by pulling the football away, I was quite unnerved when this mean girl tells Charlie Brown, excited after being invited to a party for the first time, that there was a “do not invite” list that he must have been on, and that his invitation was a mistake. Also, the presumably adult neighbors hand out candy to the other children, but Charlie Brown only receives a bag of rocks. Then there are the girls who cruelly draw on the back of Charlie Brown’s head to test out pumpkin decorating ideas as well as the demonstration that Charlie Brown is not proficient in the use of a scissors as he makes a disaster of his Halloween costume.

I never have a good answer for why only unfortunate things happen to Charlie Brown - here specifically why he is given rocks instead of candy, never stands up for himself and continues to spend time with children who are horrible towards him.

To encourage children to sit back and witness Lucy speak in a detestable way to Charlie Brown, for fun no less, smacks of teaching children how to be bystanders when bullies do their emotional worst to other children - an issue that ran rampant in my grade school as a child and is an issue that is only now being dealt with in the school systems.

I make these points to jog the memories of parents who may not remember the nuances of this story before their purchase is made, as the quality of the images used and the narration are quite high and very pleasing. It is up to parents to decide for themselves if their families would enjoy this story.

What I do want to point out is the few extras this app contains. This includes pumpkin carving, where children can carve decorations into a pumpkin which will light up with the flicker of a candle - a nice touch.

Children are also allowed to create an avatar to be used within the pages of this book, dressing this character up in various costume elements.

It disappoints me greatly, however, how the majority of these costume accessories are paid-in app purchases in a way that I find quite nickel-and-diming of parents who already spend a premium amount of money for this application.

Not only does one have to purchase many of these elements, but they sit alongside the few free costume choices, making them greatly desirable to children - much to the disappointment of many parents, to be sure.

Forgetting about the money aspect for a second, I also do not appreciate having to create an account, taking me as an adult, so far out of the tale that when the account-making was finished, I had forgotten where I was in this story. I must say, however, the finished product of seeing my avatar dressed up in my selections to be a fun and interesting touch. I just wish that the journey to get to this place were made simpler and preferably paid for as part of buying this application.

I could not find much in the way of details about how these in-app purchases work. There are a few “achievements” where one can earn “berries” towards “coins” to use in purchases, but I have a feeling that money is still needed to unlock these extras, that according to iTunes could cost parents $29.99 for a 1,000 coin pack, as not much can be bought with a simple 10 coin pack for $0.99. Having no interest in making extra purchases, I cannot report back to say if the costumes are unlocked for the life of the app or must be purchased again and again, creating the need to spend $29.99 on the extras of a children’s storybook app.

I firmly believe that for the price of this app, these costumes should have been fully unlocked as a very nice included activity that children would enjoy.

I strongly feel that the ability to purchase any of these extras should, at a minimum, be able to be hidden or turned off if an adult sees fit and should also include concrete instructions as to what level of access is being created for these elements, as I am confused as to why anyone would need to spend almost $30 on a children’s storybook. These additional dress-up details are pleasant enough, but at a level that I would fully expect them to be free, adding extra value to a pricey children’s app instead of a way of creating more revenue from children and their families.

]
Best Fire characters in World Flipper
PUBG New State's latest update reveals Suvivor Pass Vol. 2
Blast Waves lets you shoot your way through an intergalactic war in pixel art graphics, out now on iOS and Android
How to get Owlbert in World Flipper
Everything you need to know about Alien: Isolation on iOS
Evan's Remains review [

]
How to join Co-op Multiplayer in World Flipper