:: DEADLY ADDICTIVE
Share This:
Tweet
Pygmies are invading your iPad, and it is glorious.
Developer: Bolt Creative
Price: $4.99
Version: 1.0
App Reviewed on: iPad 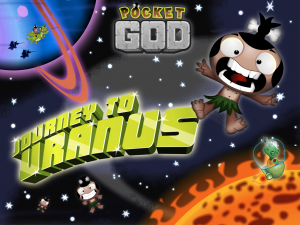 Pocket God was the first game I ever purchased on my iPhone. Back then, it was all about torturing one small island full of Pygmies. Updates expanded the godly torture methods while pushing the game to include deep-sea adventures. The game ultimately filled your death-dealing needs with hilarious and simple gameplay. While the Pygmies have long called the iPhone and iPod home, they are moving to a new place of residence in the iPad, and it is a grand move.

For those who may have never played Pocket God, the concept is an open-ended game with a plenty of mini-games. You start with a tiny island that holds up to six lovable pygmies. You then promptly figure out how to send these adorable creatures to their deaths. There is no complicated story, nor are there any mind numbing puzzles to struggle solving. It is ultimately up to the players to choose what mini-game they enjoy playing most.

The transition to the iPad brings on a few new ways to play Death God. The good old volcano chucking is still there, but you also get to destroy pirate ships and sea monsters while you shoot volcanic hoops from the three-point line. Instead of going under the sea, or to dinosaur-filled islands, you can now travel to outer space. This is there the Journey to Uranus comes in.

While you drift in the weightlessness of space, you can drag your pygmies to an alien ship and play a version of Tempest. Instead of shooting destructive bullets, you blast pygmies at your enemies. This is remarkably fun as the game still has the great sense of humor it's known for. If fighting off waves of aliens is not your thing, you can drag your subservient people to the new planet of Uranus. There is not much to do here yet, but there is a joust style mini game waiting for you. Just drop your minion on the dragon type creature and prepare to fight your way to a high score. Just be careful to not be grabbed by the hungry snakes at the bottom of the screen.

Controls also go to great lengths to stay out of your deadly way. Flicking will throw pygmies. Swiping down will shoot them to the bottom of the screen. Tap and hold to grab the pygmy and drag them to a more appropriate location. Both the alien shooting and dragon riding games utilize tilt controls. The controls are fairly intuitive and well documented in the help section. 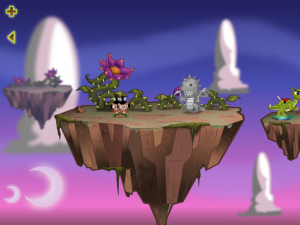 Anyone worried that the bigger screen would be unkind to these little guys will be pleased to know they love the iPad. The same art style from the small screen makes its way to the iPad. Colors are vibrant and varied, while animation are fluid. Uranus feels like a new unique world, the tropical island still feels warm and familiar, and space is full of stars and a giant spinning sun. Pygmies yell and scream as they fly through the air. There is even a ball punting sound as you flick them into oblivion. Tropical music will fill your ears for the bulk of your time here as well. Overall, your time here is light-hearted and humorous.

The downside to all this mayhem is that Pocket God is a game that is never complete, and the iPad version is no different. There are some great mini-games included here, but when you transition from the iPhone version, this just feels lacking in things to do. DO keep in mind that there will be updates that add to this experience only enriching the game as time goes on. While this may feel light on options now, it will soon be chockfull of ways to destroy a humble pygmy’s life.

Pocket God: Journey to Uranus is a marvelous addition to the series. If you are already a fan of the pocket-sized version, this will be a great compliment to your pygmy collection. If you have never played Pocket God before, this is the best place to start. Now if you’ll excuse me, I have an island to rule and a pygmy’s life to ruin! Check out a plethora of screenshots after the break.

Posted in: Reviews, Games, iPhone Apps and Games, iPad Apps and Games, iPad Games
Tagged With: Pocket god, $4.99, Bolt Creative, Journey to Uranus
Share This:
Tweet
Review disclosure: note that the product reviewed on this page may have been provided to us by the developer for the purposes of this review. Note that if the developer provides the product or not, this does not impact the review or score.
Advertisement