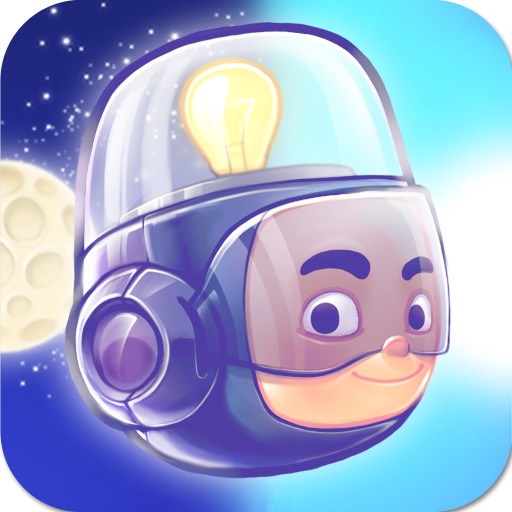 :: TERRIFICALLY TOPSY TURVY
Share This:
Tweet
How far would you go for the girl you love? Would you be willing to turn the world upside down? Turn Day...into Night?
Developer: Brazinication
Price: $0.99
Version: 1.0.1
App Reviewed on: iPhone 4

Thomas is a victim of unrequited love. This robot is crazy for a girl who has relegated him to the "friendzone." If he has any hope of winning her heart, he'll have to prove his worth is by finding a replacement bulb for the one that burnt out on his girlfriend's head. But that won't be easy.

As one might expect, this would be the perfect setup for a platformer game, where the protagonist must run and jump to clear each level. But that's where Day Night throws a twist -- literally -- into the gameplay. Much like other "auto-runner" games, Thomas can't stop moving forward. And with no direct control over Thomas, the only way the player can help him progress is by rotating their device to shift day into night and back again.

The actual mechanic is very unique, and allows the player to rotate their device 360 degrees to affect the world. In the standard orientation, the sun is shining in the sky, evil toasters are awake and stalking Thomas, mushrooms are just barely peeking out of the ground, and a whole host of other objects are in a certain state of rest/unrest. Rotate the phone 180 degrees, however, and the sun dips below the horizon, the moon comes out, toasters go to sleep and mushrooms pop out of the ground. All of these state changes will either help or hinder Thomas in his journey, but it requires quick hands and precise timing.

One skill players have to master quickly is "mushroom launching." To perform this basic maneuver, the player will have to rotate their device 180 degrees just as Thomas is walking over a mushroom. This turns day into night, causing the mushroom to pop up and sending Thomas into the air. Time it right, and Thomas will clear gaps and spike traps, or simply get to a higher platform. Time it wrong, however, and Thomas walks straight into his impending doom. Making things even more complicated is the fact that some objects only activate at "sunset," meaning the device will need to be rotated only 90 degrees. As one might imagine, things can get very hairy when the player needs to rotate between these three states within fractions of a second. Getting Thomas to his destination becomes quite a challenge in later levels.

The artwork is very good, with the menus appearing bright and cheerful. However, the actual game graphics could probably use a little more detail to make them "pop" and not look so 2-dimensional. The music, also, tends to get a bit on the annoying side, prompting a quick flick of the "mute" switch to make it go away. It's not all bad, just in the later levels, where the player would want fewer distractions, anyway.

The tilt controls are nearly flawless, and even the slightest movement is detected. The game responds about as quickly as I can rotate my phone, allowing me to make the extremely tight, precision movements necessary to survive some particularly sticky moments.

With 80 levels to play, it's fair to say that players probably won't finish the game in one sitting. Even so, the unique tilt mechanic definitely invites the player to keep going, to see what the next level is like and attempt to meet the challenge found there. The great controls and unique gameplay make Day Night a fun game with plenty of challenge. Definitely something here for players looking for something different.

Posted in: Reviews, Games, iPhone Apps and Games
Tagged With: Iphone, Rotate, Platformer, $0.99, Tilt controls, Brazinication, Auto-runner, Daniel Marques
Share This:
Tweet
Review disclosure: note that the product reviewed on this page may have been provided to us by the developer for the purposes of this review. Note that if the developer provides the product or not, this does not impact the review or score.
Advertisement

Distract Yourself With These Great Mobile Games on Sale Right Now
Steam Link Spotlight - If On a Winter's Night, Four Travelers
Here's what you need to know about Townscaper on iOS
Divinity - Original Sin 2 - Gameplay Journal - Part 14
Beginner’s guide to becoming a fearsome Chief in The Lord of the Rings: Rise to War
sugar (game) review [

]
Final Gear is FlashWing Studio and Komoe Technology Limited’s strategic RPG about mechas and maidens, out now on iOS and Android