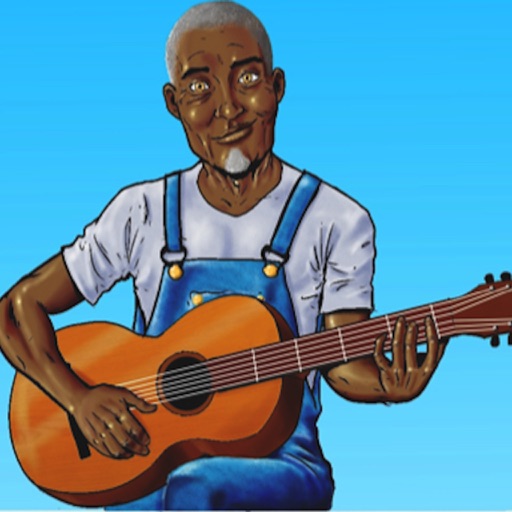 The Blues is an interesting educational comic book app, the first of its kind to teach about the Blues style of music to school children.

This comic book does a very nice job teaching about the history of Blues music and the influence the Blues has had on other musical genres. Topics such as Geography and African-American history are also presented in a thoughtful way, and I appreciate how this information is made personal with the use of main character Otis's first-person accounts.

This comic book is set in present times, with Otis looking back on his life to tell the story of the Blues, and the first time he heard this style of music. Flashbacks are incorporated to show how after running out of his house one night to chase away an intruder, he instead makes his way to a Juke Joint for the first time, adding a nice coming of age element as well.

I appreciate how history is taught in a conversational style, a terrific way for school aged children to absorb this information about the history of African Americans, including slavery, sharecropping and the invention of a mechanical cotton picking machine that lead to the great migration up north.

It is also great to learn how people made their own musical instruments, as well as background information on spirituals, “call and response’ songs, famous blues artists such as Muddy Waters and the transition to Rock ‘N’ Roll music including Bo Diddley and Chuck Berry, as well as Elvis, the Rolling Stones, plus many other musicians to numerous to list.

The illustrations look great, as is the music that accompanies this app, introducing the different styles of music one reads about. It is also a nice touch that one can double tap the page to enlarge this comic book app to see details and have an easier time reading the text.

Students will find this app engaging, especially as Otis seems as though he is looking and talking directly to the readers throughout as he explains how one can write their own blues song, including a template of sorts to help first time song writers.

It would be nice, however if students had the option to type their new song lyrics directly onto the iPad, as well as tapping the elements of their new blues name from a provided list, adding an some interactivity to this app as well.

It may be worth noting that this app is without narration, and Otis’s dialect is written into the narration, really giving Otis a voice and authentic manner of speaking, but this imperfect writing style may be difficult for some new readers to understand on their own. This would be a great app to share with children however, in both a home as well as a school setting.

Adults will especially enjoy the famous Blues artists touched upon here, and an impressive list of links one can use to gain more information about the Blues. It would be nice, however if the music used throughout this app was properly credited allowing children to learn more about specific musicians they have felt especially engaged by, information that could possibly be added in a future update.

Please note that this app will also be on sale for the month of February, Black History month.