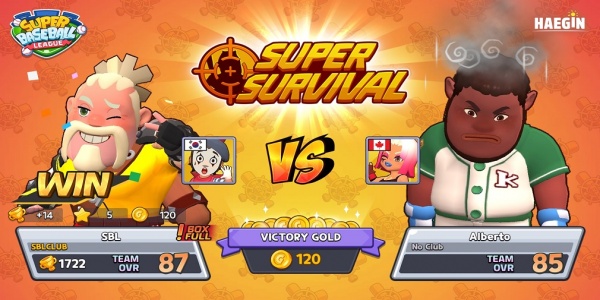 Developer Haegin has announced a rather interesting and exciting new game mode for its casual baseball sim Super Baseball League. A new Super Survival mode will add a hardcore-like feel to proceedings by ending event participation after one loss.

Super Baseball League is, as suggested, a baseball sim that takes the admittedly incredibly long game of baseball and condenses it down to one single round, or one inning. With its one-touch controls and fast-paced gameplay, the player will be able to have a go at both batting and pitching in no time at all.


The new Super Survival mode will add a sense of peril to proceedings as players will be tasked with racking up as many wins as possible to climb up the leaderboard. The further up the board, the more rewards and honor points are earned. However, they must play with the overbearing knowledge that just one loss will end both the streak and the entry in that event period.

To prepare for this daunting new mode, Haegin has also implemented the new XP Charge system. This feature allows players to take any unwanted player cards in their inventory and convert them into pure experience points to use on other players. As well as a perfect way to supercharge a star player, it can also be used to power up a newcomer to get them straight in the game. Coincidentally, Haegin has added two new All-star-Major Minor grade characters each for a total of 6, with the seventh class Major 1 also opening. A perfect selection of new characters to either XP Charge or throw into the XP grinder.

There have been a few minor tweaks made to make player life more comfortable. The maximum number of confrontations has been increased to 6, and a bulletin board has been added to Clubs to make communication easier between members.

Super Baseball League is available to download from the App Store and Google Play.