Stay in the Tech-Savvy Loop With AskJack 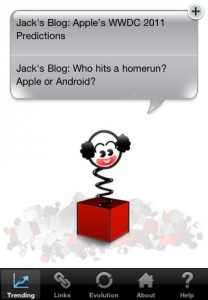 Jack in the Box (the social media blog, not the blacklisted burger joint) has released their own iPhone app, designed to cram everything from the website into a more iOS-friendly package, even including their Facebook and Youtube feeds. Ten of the tech industry's biggest websites are featured, and funneling their news feeds through the tiny clown head in a box is as simple as a few quick taps. Setting it all up takes a minute, at most.

From there it's a simple matter of checking-in with Jack every once in a while. The two newest articles appear in a speech bubble over the tiny toy's head, and once something good pops up a tap is all that's needed to check it out. Of course, the tiny bubble can also be expanded to make browsing the list easier. Searching through the plethora of news stories is all done using an in-app browser with a handy "tab left/right" function that makes jumping from news item to news item a breeze. Simply tap the right arrow and it loads the next news item.

And what if it's a slow news day? Well then there's an entire history of social media to read up on, of course. Hidden under the not-so-hidden Evolution tab is a tree that chronicles the growth of digital and social media, which itself contains a fairly extensive encyclopedia of terminology to help out the less tech-savvy. Not sure what the word "aggregator" means? Tap it and get the definition. It doesn't do much to help with news-gathering, but it's still a nice feature to have for anyone who isn't entirely up to date on networking sites such as Twitter and the like.

Sure, information-gathering isn't a new concept for the App Store., but that doesn't make AppJack any less handy to have around. It puts the content of ten major tech sites in one convenient place, and does so for the low low price of absolutely nothing. Not a bad deal, eh?

]
Best Fire characters in World Flipper
PUBG New State's latest update reveals Suvivor Pass Vol. 2
Blast Waves lets you shoot your way through an intergalactic war in pixel art graphics, out now on iOS and Android
How to get Owlbert in World Flipper
Everything you need to know about Alien: Isolation on iOS
Evan's Remains review [