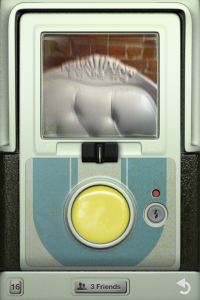 The team behind the great Hipstamatic artistic photography app today revealed a new app that brings the disposable camera into the digital age. Releasing Thursday, the new Hipstamatic's D-Series app allows a group of friends to share a 24 exposure digital roll of film across multiple devices.

D-Series has the same retro camera hardware feel and pixel perfect design that the original Hipstamatic app has. D-Series adds an interesting social slant by allowing a group of friends to share a virtual roll of film. One user starts off by selecting the camera to use and inviting friends. From there the invited photographers start shooting and each user sees a shared shot count. Once all shots have been taken, and only once all shots have been taken, all invited users get to see the shots taken.

I got a chance to try out the new app and can report that Hipstamatic D-Series does indeed bring back the nostalgic memories of sharing a disposable camera and swapping double prints into the digital age. It's a great idea and well executed. There's even the anxious need to burn the last shot by taking a picture of your foot, just to get the roll developed quicker. It's indeed very fun.

And this app wouldn't be a Hipstamatic app without the unique selection of cameras and films that it is so well known for. When you download the app there will be one unlimited use camera included. Link up your Facebook account and you'll get a second infinite use camera. Beyond that you'll have the opportunity to buy unique limited use cameras as well. The way this works in a group is that just one user needs the camera for all to be able to use it.

Synthetic Corp previously released the 2010 App of the Year, Hipstamatic, one of my favorite photography apps Incredibooth (an old style photo booth simulator), and Swankolab (think Instamatic for any photo).

Hipstamatic's D-Series will be released tomorrow in the App Store. Check our Twitter stream for a link once it goes live. Check out this (unfortunately non-embeddable) video for more details and the photo gallery below THAT for a bunch of photos from the new app.

]
Final Gear is FlashWing Studio and Komoe Technology Limited’s strategic RPG about mechas and maidens, out now on iOS and Android
The Lord of the Rings: Rise to War is now featured on the App Store and Galaxy Store
Genshin Impact - Everyone is right to complain to the developers of this hit mobile game
Battlefield Mobile: Everything we know so far
Pokémon UNITE - Tips and tricks for new players
COD Mobile Season 8: Best guns in every category