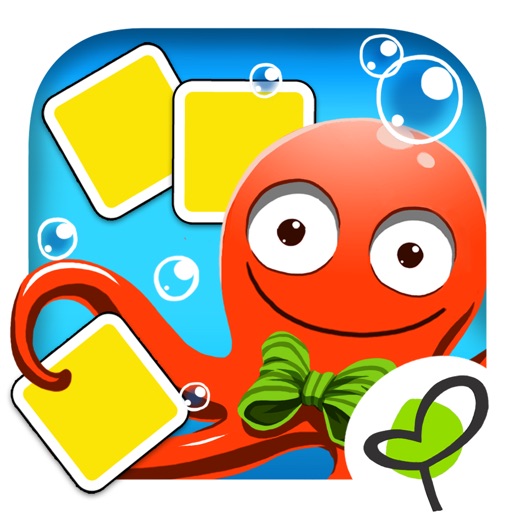 Most adults remember playing “memory" - also known as “concentration” - as children, where cards or tiles are laid out in pairs face down and players have to take turns turning over two cards looking for mates, remembering where the other cards are in order to create matches.

This style of game is also a very popular one in an application form, be it the app’s main focus or an additional section found in a storybook so it is very nice to see a “memory” style game that really stands out from the pack in terms of game play and overall quality.

Here, Gro Memo is such an app - a dedicated “memory” game app, typical in its intuitiveness as children are asked to turn over tiles to look for pairs. Yet this app is special in how quickly the game can be played if one chooses, as these tiles turn back over with great speed - an issue I have with many other apps of this nature as the card-turning can seem tedious, which can often make these “memory” style apps a chore to share with a child.

Gro Memo has a lovely ecology theme that allows children to help clean up either a forest or ocean scene, with a lovely illustrated opening page showing the nature scene in disarray and the sad animals who need one’s help.

This app is bright and colorful but also includes a slightly edgy style that I greatly appreciate as one taps these sad animals who all demand change in their own way shown through modest yet effective animation. Also seen is a modest 3D layered effect that adds richness to this nicely realized app.

For each scene, three levels of varying degrees of difficulty are included, and I really appreciate how the tiles include simple animated moments with sound effects instead of stagnant images, adding elements not possible when playing this game with a deck of cards. Another interesting detail is how tiles to avoid are also included, showing things like a polluting factory or a boat with an oil leak, adding another layer of interest to this delightful ecology-themed app.

As a tester of these “memory” styled apps, I am also very happy to report that although the score is kept for every correct pair as well as pollution tile turned over complete with witty animation, the upper levels are locked until a certain score is achieved, there is no timer included with this app. Also, simple wrong matches are not counted against the player, so children can turn cards over as often as they like to look for matches and what to avoid without feeling rushed - really nice touches.

I have enjoyed Gro Memo a great deal. The message about preserving nature is charming, as are the animated tiles - something I have not seen in other apps like this. Because the cards are so very responsive to turning over, I have found that this app can keep up with my adult high speed game play, making this a fun game for all ages - even for the adults in the house. This makes for an app that I can easily recommend.

I would also like to point out this this is another app from Gro Play, the developer for The Adventure of Sophie the Sweater, a unique storybook with a recycling theme that I also greatly enjoy. I look forward to more apps developed by Gro Play, who have developed two highly effective apps.