Our Review by Jordan Minor on February 12th, 2013
Rating: 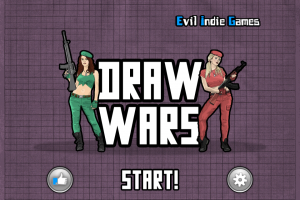 Touch screens, with their potential for direct and precise input, have always seemed like one of the best methods of controlling real-time strategy games. Draw Wars tries valiantly to make good on that promise through a very hands-on, free-form control scheme. That part is great, though the game as a whole is only just good.

Draw Wars combines the basic strategy elements of a tower defense game with the more thoughtful, pathway-drawing gameplay of something like Flight Control. Players are presented with a handful of units and have to determine what formations will take out the enemy base while protecting their own. They must consider what kinds of forces they have like tanks and bombers, and how the enemy may counter them with, say, bazooka-wielding infantry and anti-air towers. Luckily, if the strategy proves to be too daunting, players can also spend some in-game money on stronger units and power-ups like land mines and health packs.

It is a satisfying control scheme, even though it feels a bit cramped on the small iPhone display, and it makes players feel as if they have a lot of sway over the action. In trying to tweak pathways and find just the right plans of attack players can replay the 45 levels many times. However, doing so may expose some of Draw Wars’ less admirable qualities. There are a lot of levels but they are all very small in scale and have repetitive layouts. The same goes for the visual presentation. While the slick, clean, comic book art style looks great its lack of variety within the three worlds starts becoming more noticeable as the game goes on.

Draw Wars is a textbook example of a mobile game meant to be played in small chunks. The controls will always be fresh, but played the right way everything else about it will stay fresh too.


[gallery size=”thumbnail”]
Posted in: Reviews, Games, iPhone Apps and Games, iPad Apps and Games, iPad Games
Tagged With: Strategy, Tower defense, $0.99, Real time, Draw Wars, Evil Indie Games
Share This:
Tweet
Review disclosure: note that the product reviewed on this page may have been provided to us by the developer for the purposes of this review. Note that if the developer provides the product or not, this does not impact the review or score.
Advertisement