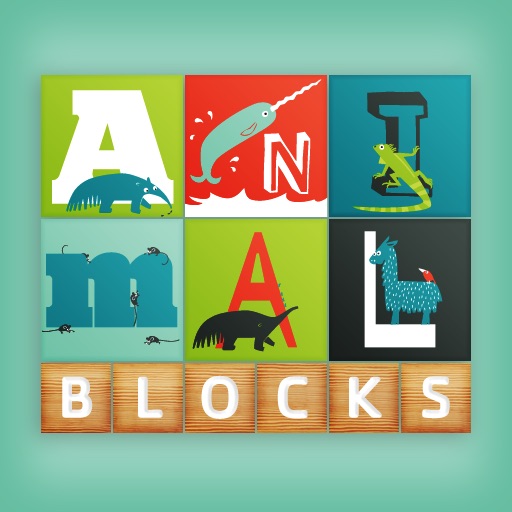 AnimalBlocks is a very nice letters and spelling app for iPad in which kids copy and drag letters into empty stencil boxes that show the correct letters in question, making up various words. This is a fairly common application design for this type of spelling game, but this app adds a unique physics aspect to the gameplay, making it stand out in the sea of “fill in-the-box” letters, phonics, and spelling applications.

I really like the look of this app, as the player can choose from many backgrounds that range from a blue sky with clouds or a sunset, to many wonderful illustrated choices with whimsical animals illustrated with bold colors and a lovely style all their own. The blocks themselves are either wood tone to better see the letters or animal blocks, which are also illustrated each with a cute and cleverly stylized animal.

It is nice how the player has many options to individualize the game play, as one can start directly dragging and dropping the blocks into the correct boxes or begin the game by selecting blocks from the row of letters choices, increasing the level of letter recognition to this app. There are buttons to scatter the blocks across the screen complete with a very satisfying sound, as well as to remove the blocks altogether, giving the player a chance to collect boxes needed from the row of letters again. Be sure to check your iPad’s settings for further options, including word lengths and US English vs. UK English and the use of magnetic blocks which cling together as if they were drawn to each other. Players also have control over the amount of "table friction" is used here, interesting because too little or too much can make for more challenging gameplay, creating a real workout for fine motor skills. I have not found what the function “Auto create blocks for new words” is, and I hope information about this choice is added soon to the info section of this application.

Although these letters do not fall to the bottom of the screen if one tips the iPad as if gravity were in control, have fun dragging or flicking these blocks into each other. If the magnetism is turned on, you may need two finger to separate blocks stuck together, a nice touch.

Nearly one thousand words are included, with subjects such as sight words, animals, or fruits. Parents will want to work with this app together with their children because these words are not narrated or demonstrated by pictures in any way, so unless the word is read out loud, pre-readers are simply copying letters aimlessly without any understanding of the words presented. This may still be helpful for letter recognition skills, but not at education as it could be if the player does not yet know how to read. It may be helpful if in the future, the letter names or even the phonic sounds could be added and announced when tapped, as well as the word name be narrated when tapped as well. It would also be helpful if there were an option to select a specific theme if one chooses. As of now, these words are random, but simple color words like "red" may be a better match over longer sight words such as “because” for the youngest players. It would also be nice to include a mode where the letter boxes need to be filled in first to last letter the way these words are commonly spelled.

Even with its limitations of no narration, the look of this app will certainly please adults a well as children, with its fun and quirky animal illustrations, as will the great use of physics and magnetic blocks, keeping this game very tactile and great for fine motor skills as well as for basic letter-matching and intro to spelling.